Or better known as Rodelbahn Fahren – is basically riding a piece of plastic down a giant steel roller-coaster slide. And in this case, one that is 900 meters long and winds down the mountain!

Okay, okay…it’s not as primitive as it sounds, the plastic board comes with a break lever that you can control throughout your ride, so you could technically slow down to snail speed at any point in the decent, if you must. The chances that you would fly out into the grass or into the mountain, is quite slim, as you’re not completely out of control. And it is in fact high quality plastic, with a comfortable cockpit and foot grooves for two pilots. And before the ride is opened every spring, it indeed undergoes rigorous quality control tests to ensure safety. So it is definitely safe, even with a child onboard.

This is my view of the ride: my son’s shoes, mine and my hand on that break lever…and a lot of mountain ahead!

Because the station itself is at 1500m a.s.l., those mountains and glaciers in front of you during the ride are about a thousand meters higher with snow all-year-round, so even during the summer months when the ride is open and the grass has already reclaimed its green, a ride down can seem like flying into the Swiss Alps!

My father (67) also had to try out the Rodelbahn. Though we did start the ride together, me and the little boy on one board first, and he on his own board just a few seconds after, we did not end anywhere close to one another. When my son and I got off at the end and saw that my father was not behind us, I initially started to wonder what had happened. A few minutes later, after what seemed like forever, he reappeared at the bottom of the last turn, sitting on his board, with a silly grin on his face, like a boy who had just gotten away with mischief.

After he stepped off his board, I asked him why he had taken so long, he simply replied with the same silly grin, “Of course! I slowed down so the ride would last longer!” … Welll, of course he did.

I could only shake my head and laugh. Cute, but NOOO! This is not Disney Land, it’s a slide, down a mountain… you’re meant to go fast!! Sooo, we had to ride it again. 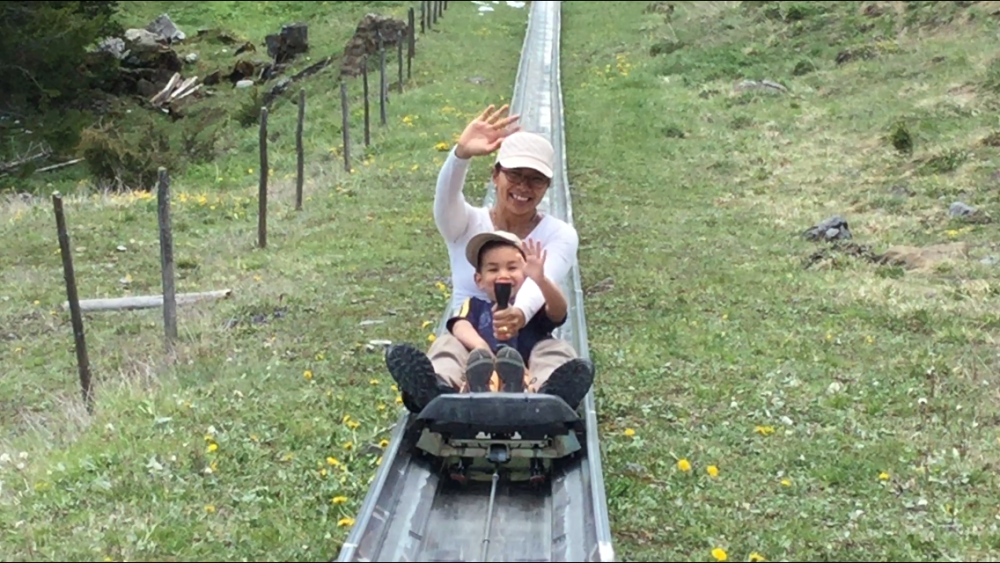 This time without the camera, and I must say, aside from the safety concerns when operating a break lever in one hand and a camera in the other, the second ride felt, in a sense, more genuine. Knowing I could not hit record or save snapshots of the experience, I was able to let go and enjoy the ride with my son without distractions, soaking up the mountain air, the hair-raising high speed, and my son’s giggles while we sped down the mountain.

We were able to ride faster the second time around too, reaching what seemed like 20km/hr (it may not sound a lot but try riding your bike at this speed and imagine you were on a piece of plastic instead)– it is quite fast! It was impossible not to let out an occasional scream, especially in the turns, when you start to tip and ride parallel to the ground. Apparently, rides like these can reach a maximum speed of about 40km/hr, I can only imagine how terrifying that must feel on a plastic board sliding down a tin plate!

Though the picture above can be misleading, there are actually very few sections where you ride straight down. That’s me and the Preschooler on the way back up after the ride. A steal cable pulls you from the boarding platform to the starting point of the ride, and after you’ve had your 900 meter rush down the mountain, the cable takes you back to the boarding platform.

My mother (68) on the other hand, scared herself nervous just thinking about the idea of riding down the mountain unbuckled and only a break lever between you and your fall. Already, taking a Gondola ride can give her goosebumps. Fortunately, she was ecstatic just watching and filming us coming down instead, so we had a willing cameraman to take the pictures. Thanks mom!

At the mountain station of Oeschinen, a short 8 minute Gondola ride from the small town of Kandersteg (pictured above) in the Bernese Oberland, this ride is open to anyone during the months of May to October. You just need to remember to keep at least one hand on the lever in order to break, if the other must flail in the air. At a modest price of 4ChF per ride, it’s well worth the experience especially if you’ve got a need for speed and a thirst for mountain air and the magnificent view of the Swiss Alps that comes with it. (All info on their site in German here)

There are numerous Rodelbahn rides like this all over Switzerland, and the rates are usually in the same range. Well worth the visit if you’ve outgrown the playground but still wish you could go down the slides.