I wrote a version of this article originally for  Newly Swissed Online Magazine and was published on May 6, 2016, on the day of the Swearing-In Ceremony of the Swiss Guards in Rome.

So this is my take on some interesting facts about the Swiss Guards. A fan of traditions of all sorts, this little list is my second instalment to my tribute to the Swiss Guards. I owe a lot to this small corps, it is after all what brought my husband to Rome. And my curiosity about it, is what brought me to the musuem where we met. However, if I had known this much then, I might not have been inclined to spend an afternoon visiting a museum to learn more about the guards that day. But that’s ten years since. That museum no longer exists, but the Swiss Guards still do. So for tourists and pilgrims, friends and followers, here’s 13 Facts you probably did not know about the world’s most colorful guards:

Before applying for the Pontifical Swiss Guard, each recruit must be a single male of Swiss citizenship standing at least 174 cm (5’ 8 “) tall, between ages 19 and 30, and  a also holding a high school degree or professional diploma.

Each recruit must have completed basic military training in Switzerland in order to continue to the first five weeks of training with the guards in Rome. After this training period, they are known as Halberdiers, owing to their halberds, the primary weapons the Swiss mercenaries used in the 14th and 15th century.

After being sworn in, the Halberdiers and their parents get a private audience with the Pope where they receive a personal blessing.

A Swiss Guard’s shortest contract is 25 months. Once a Halberdier starts his contract, he will attend Italian lessons if he does not already speak the language. By the end of the first year of service, the Halberdier is usually ready for guard duty at the main gates of Vatican City, dealing with everyday tourists (and often VIP guests, too!).

The everyday uniform of the Swiss Guard is the blue duty uniform. 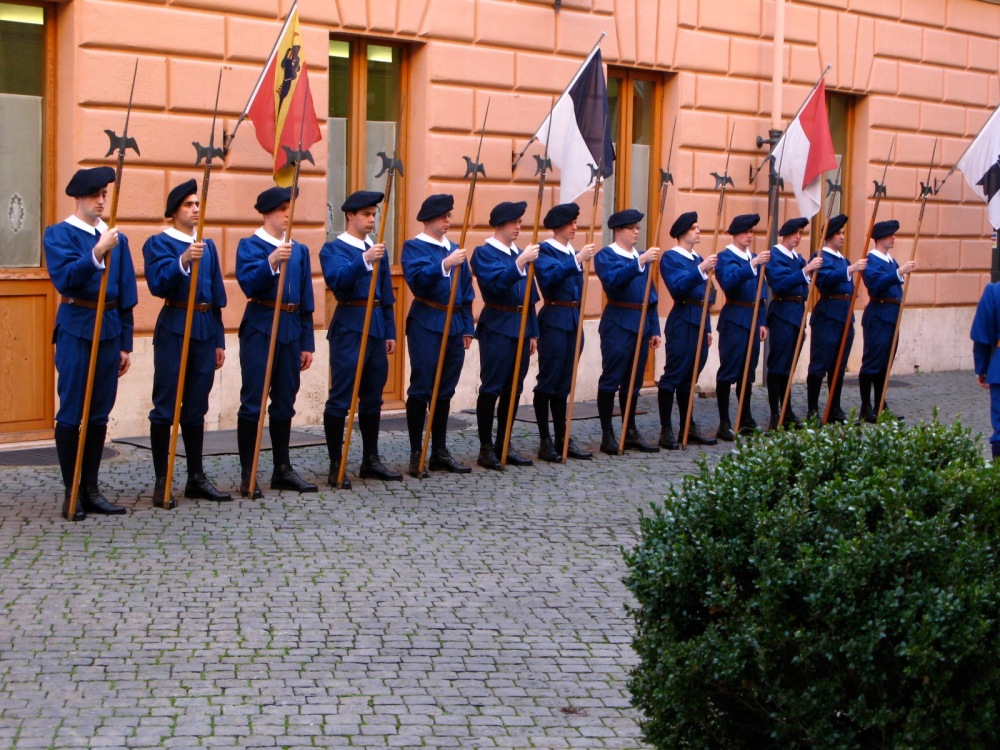 The colorful uniforms in the Medici colors of red, yellow and blue, known as Gala Uniforms, were put to use only after 1910.

Each Gala Uniform is sown by the tailors inside the Vatican barracks – tailor-made to fit each Swiss Guard. This process takes at least 30 hours per uniform!

After completing service, all of the Swiss Guard’s personal uniforms are destroyed, never to be used again. Some of the armor that are used today are originals from the 15th century. New armor is made by specialized blacksmiths to replace ones that can no longer be renewed.

When a Swiss Guard is standing still with the halberd and is not talking, he is on Honor Duty. This means that he should not be approached.

But when a Swiss Guard is standing with folded hands and facing the people, he is on Guard Duty. This means that he may be approached for questions or sometimes for pictures (if you ask nicely).